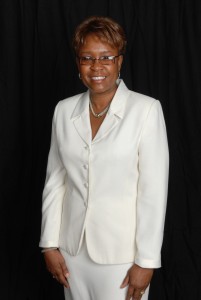 "Being confident of this very thing, that he which hath begun a good work in you will perform it until the day of Jesus Christ." (Philippians. 1:6)

This was the scripture placed on the heart of Juanita Green in the early years of her salvation. Her longing and desire has been to do the will of God and share His word of salvation, comfort , joy and the possibility ofchange to all who will hear.

Juanita grew up in West Philadelphia, attended the Philadelphia Public schools and accepted the Lord Jesus at age 16. With a desire to learn more about the Lord, and to be used of Him in ministry, she was led to become a part of the Ethiopian Jesus House which was located in North Philadelphia. Through this ministry, she acquired a love for evangelism and teaching the gospel. There were many young people there who were very enthusiastic about winning souls, and as a result, it was common to randomly grab another brother and sister and go out into the streets to pass out tracts and witness for Christ. Juanita teamed up with one such brother who also had a love of sharing God's word, Benjamin Green. As they spent many Saturdays traveling from city to city evangelizing, they eventually gained a special attraction for one another and not long thereafter, the Lord confirmed to them that they were to be married.

Benjamin and Juanita were married on January 25, 1975. From this union were born four beautiful children: Joy Benita, Kevin Vaughn, Eric Saeed and Joel Baye' Green. In the 1980's, Benjamin was ordained as a minister and in 1992 he accepted the Lord's call to pastor. In 1994, Juanita opened her own family day care program at which time she also attended Community College of Philadelphia in the evening carrying 12 to 15 credits per semester. She successfully graduated with honors in May of 2001.

Today, Juanita is Associate Pastor alongside her husband, Rev. Benjamin Green. She also functions as overseer of the Women of Vision Women's Ministry and is working toward opening a day care program at the church called "Foundations".